As part of their World War One topic, Year 6 have been finding out about what happened to the Bradford Brothers, who came from County Durham, during World War One.

The children enjoyed using a range of primary sources (including the 1891 census, photographs, maps, newspaper cuttings and war reports) to discover about their life growing up in northern England as well as their experiences in France and Belgium during the war.

Lots of interesting facts were discovered about the brothers. Florence said ‘I found out that two of the brothers were awarded the Victoria Cross for their bravery during the war and another brother went on to be knighted by the Queen. It was so much’. 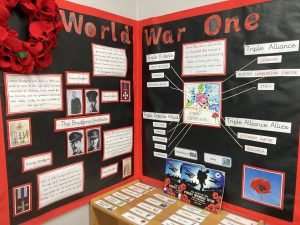