Understanding of the World

Children have been learning about healthy eating and the human body as part of our science unit: Animals, including humans. In today’s lesson, children learned the names and location of a variety of human bones, this included: the skull, the vertebral column (spine); the scapula, the femur, the pelvis, and many others located in both the arms and legs.

Children then looked at investigating movement and set up an investigation that asked the question: does femur size (estimated length in cm) have an impact on the distance jumped? Femur size differed child-to-child and this was the only variable that was different. Variables we kept the same included: type of jump, condition i.e. indoors same starting point, number of jumps per child, etc. We concluded that the longer distances jumped did not necessarily correlate to a longer femur size, as the longest jump was 175cm and the femur size of Child A was 30cm (average). We did, however, note that this may be down to their technique and skill in the jump. We then discussed how we could improve the enquiry and children suggested that they wear their PE uniform and are allowed three jumps instead of won. 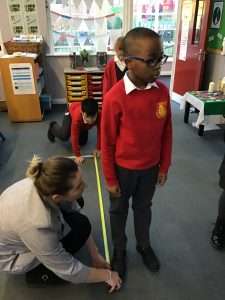 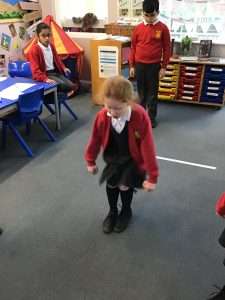 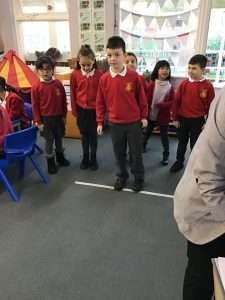 Children learned about the Stone Age, Bronze Age and Iron Age as part of British History. One of the areas they focused on was Skara Brae. Uncovered by a storm in 1850, Skara Brae gives a remarkable picture of life 5,000 years ago, before Stonehenge was built! Key Facts British history at Key Stage 2… END_OF_DOCUMENT_TOKEN_TO_BE_REPLACED

For anti-bullying week, Year 3 children participated in a number of activities – one for each day of the week. On Friday, children read Willy the Wimp by Anthony Browne. The story is about Willy, a diminutive chimp, who wouldn’t hurt a fly. It’s no wonder the suburban gorillas call him Willy the Wimp… until… END_OF_DOCUMENT_TOKEN_TO_BE_REPLACED

Children have been learning how to write a brochure in our literacy lessons. The context was Newcastle and Gateshead. Children learned how to write persuasively by using persuasive adjectives, the power of three, direct address, photographs, personification, and rhetorical questions i.e. are you tired of sitting in front of the TV? Are you tired of… END_OF_DOCUMENT_TOKEN_TO_BE_REPLACED

In Year 3 today, children did three experiments to look at soil permeability as our science unit of rocks and soils came to an end after two weeks of super science in our new block curriculum approach. Children used three different types of soil – sandy, top, and chalk, and did tests for each. First,… END_OF_DOCUMENT_TOKEN_TO_BE_REPLACED

In our science unit this term, children have been learning all about rocks, soils, and fossils. In today’s lesson, children focused on how rocks turn into soul. They focused on how weathering can quicken this procedure and learned how rocks can expand during the day and contract during the night, and how this process of… END_OF_DOCUMENT_TOKEN_TO_BE_REPLACED

In science this week, Year 3 have been learning all about different types of rock. Children have been investigating the school grounds and inside the school to see which type of rock has been used and why. In class, children have been testing rocks for their durability – scoring each test on a scale of… END_OF_DOCUMENT_TOKEN_TO_BE_REPLACED

Mental Health and Well-being In class today, children looked at how our mental health includes our emotional, psychological and social well-being. It affects how we think, feel, and act. It also helps determine how we handle stress, relate to others, and make healthy choices. Mental health is important at every stage of life, from our… END_OF_DOCUMENT_TOKEN_TO_BE_REPLACED

In class, children reflected on what they have learned during our Pentecost topic. Children spoke about spreading the Gospel message through the gift of the Holy Spirit. We also discussed key learning focuses: Jesus is risen, Jesus promises to send the Holy Spirit, the Ascension, Pentecost day, Passing on the Good News, and Spreading the… END_OF_DOCUMENT_TOKEN_TO_BE_REPLACED

Year 1 had a fun time in Heaton Park as part of Mental Health Awareness Week. The children enjoyed a walk around the park looking at nature and spotting animals. After they spent time playing in the park, playing games and enjoying each others company.         END_OF_DOCUMENT_TOKEN_TO_BE_REPLACED