One of our Year 5 teams progressed from the main group stage of the Hoops4Health programme competition and reached the Newcastle Finals on Friday night. The team played their semi-final on the Newcastle Eagles court before their main game at 7.30pm. It was an evenly contested match against a local middle school -a great achievement for a school our size to compete so well against a larger sized school. St. Teresa’s scored two baskets, meaning we were 4-0 up with only a few minutes remaining. Unfortunately, we were pinned back in our half for the last couple of minutes and the pressure paid off for the opposition as they scored two late baskets, meaning the match ended in a 4-4 draw.

A shoot-out followed and St. Teresa’s were unfortunate to lose out on a place in the final. The whole squad should be very proud of each other. Mrs Mackenzie and Mr Turner are certainly pleased with their effort, determination, as well as their sportsmanship. 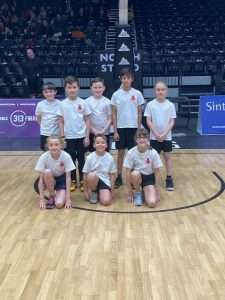 Today in R.E., children learned about Isaiah, who was a Hebrew prophet, who was believed to have lived about 700 years before the birth of Jesus Christ. Born in Jerusalem, Israel, he was said to have found his calling as a prophet when he saw a vision in the year of King Uzziah’s death. Isaiah… END_OF_DOCUMENT_TOKEN_TO_BE_REPLACED

We had a fantastic time taking part in Buddy’s Big Workout for the NSPCC. We discussed the importance of staying fit and healthy and also how taking part was helpful to the NSPCC.   END_OF_DOCUMENT_TOKEN_TO_BE_REPLACED

Year 5 have been learning about ‘Ourselves’ in RE. They have been exploring their unique qualities and talents alongside looking at scripture. After reading one of St Paul’s letters to the Colossians, they shared responses to questions before writing their own acrostic poems celebrating unique qualities and differences. END_OF_DOCUMENT_TOKEN_TO_BE_REPLACED

As part of our well-being sessions, children are often asked questions that can at first be a little challenging. This week’s session asked the question: what do I like about myself? Children spoke about being caring, kind and helpful. END_OF_DOCUMENT_TOKEN_TO_BE_REPLACED

Today another group of children shared a collective worship they had planned, it was based around the theme ‘Change’. One child invited the class into a circle and asked the children to concentrate on their breathing. They had to breathe in God’s peace and breathe out any worries. After that two children read the story of Zacchaeus.… END_OF_DOCUMENT_TOKEN_TO_BE_REPLACED

END_OF_DOCUMENT_TOKEN_TO_BE_REPLACED

Reception Class have established a link with the sheltered living community, Jack Common House. Last week they went on their first visit. They introduced themselves to their new friends and shared photographs of their families. END_OF_DOCUMENT_TOKEN_TO_BE_REPLACED

Year One had a fabulous time at the afternoon tea party. The school was filled with friends, family and people from the wider community of Heaton. The children in EYFS and KS1 showed of their cooking skills by producing wonderful cakes for the Heaton Bake Off Project. Everyone was entertained by St Teresa’s fantastic choir,… END_OF_DOCUMENT_TOKEN_TO_BE_REPLACED

Year One has had a great afternoon cooking. As part of the Heaton Bake Off Project and working towards international week the children made Polish Rogaliki. Mrs Anulewicz took the class through a wonderful session explaining step by step the method of preparing and baking Rogaliki. The children had a great time rolling out their… END_OF_DOCUMENT_TOKEN_TO_BE_REPLACED